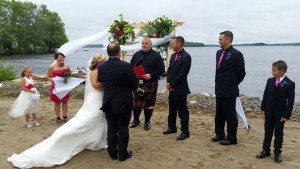 Did I mention these amazing celebrations took place five weeks apart?  My sons had thirty-four and thirty years to find the love of their lives, and what do they do? They meet two remarkable women within a few months of each other, propose to them three years later within seven weeks of each other, then marry them six and seven months later. (Rumor has it there was a brotherly … discussion as to who would propose first, which the elder son apparently won.)

LakeWatch wasn’t exactly looking its best when the two happy couples showed up en masse and asked if they might have their weddings down on the beachfront.   It was mud season, you s 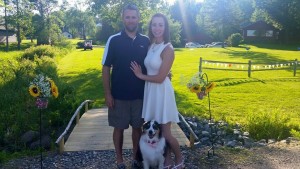 ee, and everything was rather battered and bleak-looking from the winter.  My first thought was: “What will the parents of the brides think when they come check out the venue?”  My husband’s first thought was: “Wow, I have some highly-motivated free labor to help me whip this place back into shape.  Heck, with four able-bodied people onboard, I can even add a few extra projects to the roster.”  And off he went to talk to a man about a bulldozer.

Whenever I dared peek out the window in April, May, and the first part of June, (Hey, I had a book to write!) it was to see five adults, two excited children, two clueless dogs, and a faded green tractor straightening fence posts, cutting broken branches off our towering maple, oak, and pine trees, lugging said branches deep into the woods to fashion brush-pile homes for various critters, arranging (and rearranging) a diabolical puzzle of docks, revitalizing planting beds, mowing, raking, and painting.  And yes, one day I saw Robbie sitting on a bulldozer … rearranging dirt. 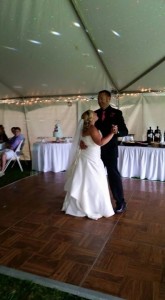 By June 15th, when the first tent went up on the beachfront, (one week after I turned in my book!), LakeWatch was almost as beautiful as the two brides about to call it their home.  (Have I mentioned I can throw a rock from my porch and hit either of my sons’ homes?  Oh, they dutifully went out into the great big world, but they came back—for the lake, of course, not us.)  The second tent went up on our bright green, perfectly mowed front lawn on July 18th, with chairs set out on the beachfront for the ceremony. (Son number one and our new daughter-in-law’s ceremony actually took place at a bed and breakfast up in the mountains overlooking Moosehead Lake, which they celebrated with family and friends the following weekend here at LakeWatch.)

Yes, this veteran romance writer cried—at both ceremonies—quiet sobs of sheer joy.  And I nearly lost it again the day after the first wedding, when I went on FaceBook and caught myself wracking my brain trying to remember who Jessica Chapman w 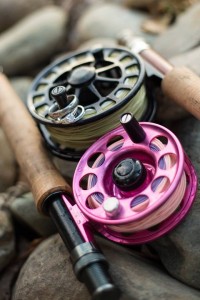 as only to suddenly realize she was my new daughter.

The tents have disappeared as mysteriously as they arrived, all the guests have come and gone—for the second time—and the three mailboxesat the end of the driveway now all bear the same name.  And so six adults, two children, two dogs, two cats, and fourteen laying hens are all nicely settled into happily-ever-after and eagerly waiting to see what the universe has in store for us next.

Wait!  Are babies as contagious as weddings?

Speaking of the universe, I have to appreciate its impeccable timing.  Disaster was surely avoided when the universe obligingly kicked my writing muse in the butt so I could finish my book in time to enjoy a summer of festivities—while nicely saving me from having to straighten fence posts and paint.  And then it thoughtfully brought this amazing summer to a close by releasing Jess Sinclair’s love story, It’s A Wonder Wife, on August 25th.

Oh yeah; definitely lots of loving going on up here in Maine!