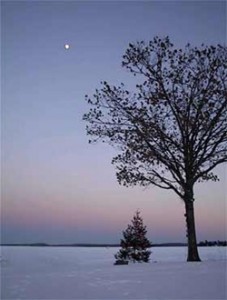 The outside thermometer reads nine below zero this evening, and winter is firmly entrenched here. The lake is covered in a fresh blanket of snow, a stunning contrast to its more lively blue summer dress. And tonight, with only starlight and a crested moon shining upon it, the frozen tundra beckons.

For Robbie and me, the walk to our ice shanty on this silent and frigid night is a journey into the timeless void between heaven and earth.

Cold snow crunches beneath our feet and our breaths puff past our numbing lips (forming icicles on Robbie’s beard), as we trudge in silent anticipation. We reach the ice shanty, set out our chairs, and sit reclined to gaze up at the stars as we wait for the conversation to begin.

Very few people realize that lakes have something to say. But on this crystal clear and windless night, our lake finally begins to speak in a language as ancient as the earth itself. It is sometimes only a whispered snap or a muffled grunt, and sometimes it’s a long and deep and resonating moan. The lake is making ice – cracking, expanding, shifting. It is the sound of an awesome power that is capable of moving boulders and reshaping shorelines.

Our chairs gently quake as a fissure less than an inch wide splinters like frozen lightning for over a mile in several directions. And if we are lucky, and patient, we will hear the whistle of a crack reach shore with the force of a sonic boom. Houses hugging the lake will shiver on their foundations when this happens, startling the occupants – bringing a smile to seasoned lake-dwellers and panic to newcomers.

I have often tried to describe the sound to others. It is as if I am standing above a pod of whales deep in conversation – gurgles, chatters, guttural pops, and lamenting groans echoing through the starlit night. 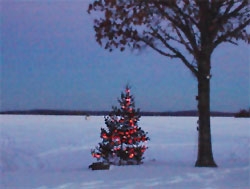 And we have been known to talk back, just as animated and feeling blessed to witness this gift. Growing up, our sons would – with mitten-muffled applause – encourage the more laudable booms and more violent ice-quakes. Friends visiting from away, dragged onto the ice on such an ungodly cold night, would run back to the house, shaking their heads, thinking us strange.

But how often do we have such conversations with Nature? What’s the point of living on a lake if we’re not willing to stop in for a visit on even the coldest of nights? Thick clothes and a thermos of hot cocoa are enough to ward off the chill, the sights and sounds and ice-quakes enough to warm our hearts.

This Christmas we set a small fir tree down by the lake and covered it with lights. It has stood there for over a month now, and we’re finding it impossible to turn off the power. Most Christmas lights are gone by the first week of January, but ours are still lit, still bringing a touch of warmth to the night. By Valentine’s Day, maybe, we’ll have the resolve to unplug the tree, when the days grow noticeably longer and the weather (hopefully) relaxes its grip. Until then our colorful ambassador will continue to soften the harsh edges of winter and welcome anyone searching for a conversation with Nature.

From a magically beautiful Maine…