I have found that sometimes Mother Nature simply refuses to be ignored, and that she’s not above screaming in our ears when she wants our attention. I was reminded of this early last fall, when I was developing my fifth Highlander book. A murder of crows (yes, that’s what they’re really called), nine to be exact, started screaming at me from the trees on my front lawn. 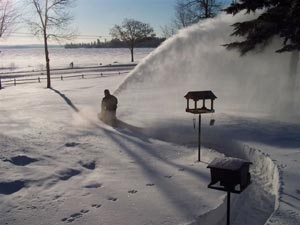 One particular fellow (that I named Talking Tom) seemed to think it was his duty to sit outside my bedroom window and wake me up at 4:00 a.m., and he would caw, quite loudly and nonstop, until I got up, got dressed, and headed across the yard to my writing studio. (Which might suggest why they’re called a murder of crows. Not that I was ever tempted, mind you, but I can see how some people might be.)

It may have taken me the better part of three weeks, but I eventually realized that my crows wanted to be in my book. Or else the noisy buggers had been told I was a pushover, and they merely wanted free food.

Now I don’t know many people who feed crows, but I can tell you that once you’ve started, you had better not stop with the handouts. Which was why every morning for all of last fall and through the winter, I would get up at the crack of dawn, get dressed in multiple layers, and head outside to arrange dinner scraps and little piles of dry cat food on the ground as I made my way to work.

This seemed to appease if not to encourage my black feathered friends, and actually proved entertaining. But that entertainment often came at the expense of my husband, who was enlisted to snow-blow a circular path through the deepening drifts, right through the middle of our front lawn. When people asked Robbie why he was snow blowing his lawn, he would only mutter something about it being cheaper than a divorce.

I got so crazy in fact, that I began devising elaborate menus. I begged for scraps from neighbors (though once they realized what the scraps were intended for, and not caring to be awakened at the crack of dawn on weekends, they suddenly ate everything on their plates), I brought home doggy bags from restaurants, and I even purchased canned dog food, knowing my pets needed plenty of protein in sub-zero weather.

Crows do not like canned dog food, I found out. They wouldn’t touch it. Heck, they took one sniff, looked toward the house, and start scolding. And they don’t like shrimp, or carrots, or overcooked broccoli. But they do like home cooking (smart birds). Broth-soaked beef stew was a winner, spaghetti and meatballs got scoffed up, and their most favorite food turned out to be steak (we ate the steak; they got to pick the bones). I also learned that crows like dry cat food, although my three confused cats couldn’t figure out why I had started feeding them on the front lawn.

But sometime in early December, my nine crows disappeared — right when I was shoulder-deep in my book. Suddenly, I was at a loss. I slept through the sunrises, and I awoke uncertain and directionless, unable to write. The noisy inspirations for my book — especially for one of my main characters, Talking Tom — had abandoned me.

But one week later, quite literally out of the clear blue sky, three of my crows flew in off the frozen lake and landed in a tree overlooking their old feeding spot. The pot-bellied squirrels had eaten everything I’d put out (who knew squirrels liked cat food?), and my crows started to make such a ruckus that I rushed out to give them the leftover stew we were supposed to have for dinner that night. 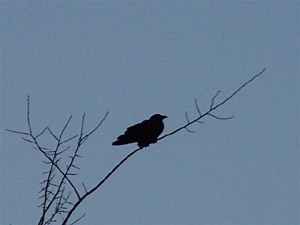 My crows were back! My book was saved! I immediately headed to my studio and started writing again. And when you read Winter MacKeage’s story and meet Talking Tom, know that he truly does live — not only in my imagination, but in my dooryard.

So what is Mother Nature trying to tell us when she demands our attention? For me, she’s saying listen to the universe, for that is where inspiration dwells.

Sometimes I’ll hear only a whisper, or merely sense an unspoken urge, and sometimes I’ll be blasted with a deafening cacophony that demands I examine my direction and purpose.

Do you ever stop and listen? What do you hear?