Not long after I met my husband – more years ago than I care to acknowledge – I found myself wondering what mysterious force could make a man sit on an ice-covered lake in below freezing temperatures, and spend hours patiently waiting for a flag to signal that a fish had just taken the bait. Summer fishing I could understand; who wouldn’t enjoy spending a sunny day in a boat on a beautiful lake, having nothing to do but read, snooze, snack, and jump in the water to cool off? But when my future husband grabbed his ice fishing traps and bait pail, and offered to take me with him one surprisingly bright winter morning, sheer curiosity had me trudging beside him onto the frozen lake. And that was the day I not only became hooked on winter fishing, but saw the entire world through new eyes.

The magic began with the sound of a gasoline-powered ice auger as it bore through the frozen shroud of ice to suddenly well up a gusher of slush-laden water. I distinctly remember peering down into that dark, seemingly bottomless hole, trying to imagine the watery world a mere ten inches beneath my feet. 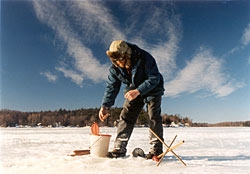 How could any ecosystem survive five months of numbingly cold, sunless living? Or was the ice really a cleverly designed shield, protecting the lake’s inhabitants from the harsh winter weather? But even more bothersome to me at the time, had my husband-to-be just opened a painful wound by drilling ten holes in the lake’s protective mantle? (On our lake, each fisherman is allowed five traps – which is why, I inadvertently learned, lots of men encourage their wives or girlfriends to go fishing with them, as the more traps set, the better the chances of catching supper. And here I thought my guy just wanted to spend some quality time with me!)

The regulation book that came with my fishing license that long-ago Christmas, stated that I must tend my own traps; so I was taught how to bait my hooks with tiny minnows, feed the thick lines down those dark holes, then set the flags. (A big fish comes along and eats the little fish, the flag shoots up, and – hopefully – I pull up the line with the big fish still attached.) But instead of five traps, I was told only to set four. Then I was handed a very short rod as well as a plastic bucket to sit on, and shown how to jig over the fifth hole. (Jigging is actually bobbing the line up and down to attract a hungry big fish with the movement of the little fish. I jigged slowly, afraid of making my poor little minnow sea-sick.)

But here’s the really magical part. I was sitting in patient bliss on that bucket in the middle of that frozen lake for maybe an hour, munching down a perfectly cooked hotdog (I still can’t figure out why food tastes better if it’s cooked and eaten outdoors), when something suddenly tugged on my line! I don’t mean a sharp jerk, but a barely perceptible tug that hardly moved the tip of my tiny rod. I didn’t jump to my feet in excitement, but sat staring down that dark hole in awe. Some unseen creature (hopefully a large trout or salmon and not a cousin to the Loc Ness Monster) tugged again, and with a smile of delight I gently returned the gesture. A subtle tug-of-war ensued, and I can’t begin to describe how sparring with something unseen, a mere ten inches below me but an entire world away, made me feel. Words conveying my heart-thumping joy, anticipation, and up until then dormant desire to do battle – and win! – seem inadequate.

I was coached on how to pull up the line without jerking the bait out of the big fish’s mouth, only to find myself suddenly scrambling back with a yelp of surprise when a huge landlocked salmon shot free of the hole and angrily began flopping on the ice. My delighted fishing partner palmed the beautiful salmon, gauged its size, and proudly (as if he had battled the beast himself) declared it a keeper.

I immediately began pleading for him to throw it back.

I don’t know who gaped more, my future hubby or that displaced fish, but with a sigh of resignation, the wonderful man bent down and let the salmon slide free, its tail giving a happy splash as it disappeared back into the dark, watery depths with its belly filled with my bait. (I’ve been ice fishing for nigh on thirty years now, and though I’ve had many fine meals of freshwater fish, I still more often than not plead that my catch be released. Which is why my husband always packs hotdogs in our cooler, or simply refuses to take me with him when he has a hankering for baked salmon.)

But I still remember my first experience on the ice as a day of many lessons: about ice fishing, about how my then future husband’s mind worked, and about my own mindset. How does that old adage go? Before you judge a man, you should probably walk a mile in his shoes? Well, I spent that day seeing winter fishing through another’s eyes; and I learned that in their own way, men are just as spiritual, inspired, and compassionate as we women. But instead of a suit and tie and wing-tips, some men might prefer to dress in long johns, a bomber hat and warm boots, and connect with the universe in the ultimate cathedral.

This was quite an epiphany for me; I learned not to assume that people are weird simply because they have a passion for living each day as it’s given, rain or shine, thunderstorm or blizzard, forty degrees above or twenty degrees below freezing, with nothing more than a gently rocking boat or a plastic bucket to fish from. (I’ve never admitted this to him, but when Robbie released that beautiful fish just to appease my soft soul, I knew I had found the man I wanted to spend the rest of my life with. But please keep this our little secret, because he still thinks it was his manly charm that captured my heart.)

So how does one magical day of ice fishing become a romance novel almost thirty years later, appropriately titled The Seduction of His Wife? Each of my stories begins with some tiny insight on my part, that somehow lends itself to a whole host of questions. (And Lord knows, I have more questions about life and love and the human spirit than is healthy!)

So … if spending one simple day with my guy can give me a glimpse into his mind while teaching me something about myself, how might a man attempt to get into a woman’s head, and therefore learn more about himself?

And being not only a writer but an avid reader, this train of thought eventually led me to wonder what men think about romance novels. Do those larger-than-life, tough, sexy heroes threaten men? Intrigue them? Or are guys just plain curious about why we women stay up until the wee hours of the night reading romances? Then again, do men think that if they were to read a romance novel, they might come to understand us women better?

Another consideration I had when penning this book (see how the questions keep multiplying?): Do romance novels ever influence a woman’s everyday life? Do they make us see things differently as we experience the world through our fictional female characters? If not, then what happens to all those romantic tales after we’ve read them? Do they simply evaporate into the ether, never to be thought of again, or do they ruminate someplace deep inside us, giving us a sense of … oh, I don’t know, hope maybe? Anticipation?

Every romance author’s dream is that our work will strike a chord and tug a few heartstrings. I like to call it the ‘aahhh’ factor, where a reader closes one of my books and softly sighs, knowing all is well in that fictional world, so surely there’s hope for the real world.

The heroine of The Seduction of His Wife, Sarah Knight, certainly feels this way. In fact, she lives in constant hope that one day she will become a feisty, confident woman just like the heroines in the books she reads. Sarah’s only problem though, is that she’s so caught up in her fictional worlds, she probably wouldn’t recognize happily-ever-after if it walked up and kissed her on the nose.

Thinking back to my first day on the ice, I wondered what sort of hero it would take to pull Sarah out of her books and into the real world. That was when I remembered this really nice guy by the name of Alex Knight (who happened to be ruggedly handsome and conveniently single) living in the deep woods of Maine. I thought he just might be brave enough (he’d certainly be motivated when he saw her) to challenge Sarah’s deeply entrenched fears about life and love and happily-ever-after. So I decided to marry Sarah and Alex to each other before they even met, then have a bit of fun watching them figure things out on their own.

Until later, from LakeWatch … happy reading!