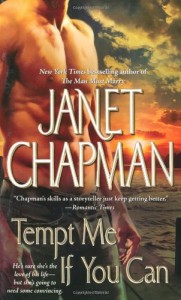 When confirmed bachelor Benjamin Sinclair receives an anonymous letter claiming he has a teenage son, he’s in shock. He tries to track down his first love, but found that she’d disappeared completely, leaving their son Michael with her sister Emma. When Ben finds that once-shy Emma Sands has blossomed into the strong, beautiful owner of a small chain of sporting camps, he signs up as a guest, hoping that in sixteen years he’s changed enough that she won’t recognize him, and he can get to know his son without complication.

But Emma would recognize Ben Sinclair anywhere, anytime—and so does Michael. While Michael can’t wait to get to know his father, Emma is more cautious, fully aware that the kind of man who would abandon his pregnant girlfriend and his son is one she didn’t want around. Realizing that he’s falling in love with not only his newly discovered son, but also Emma, Ben becomes determined to find a way to make her love him back.